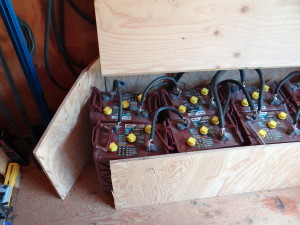 All was not peace and tranquility. This is what happened to our batteries. Neither I, nor our installer, could explain why this occurred. Rip (our installer who, in his 20+ years of experience, had never seen something like this) confirmed that I had properly winterized the system prior to leaving last fall.

The speculation is that a perfect storm of circumstance occurred (heavy snow, cloud-cover) that must have totally obscured the solar panels. In the absence of sunlight, the panels could not maintain their current to the batteries, the batteries then discharged and froze.