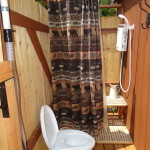 Thanks for all the advice – especially Pr. John and Dave Bourbon – and help (Dana Schutter).

The shower enclosure is finally finished. We’ve been using the shower for about a month now. What’s new in the picture, as you can see, is the addition of a composting toilet.

These things are really nifty. There is absolutely no unpleasant odor. There are two reasons for this: first, the urine is kept separate from the feces. With no nitrogen and sulfer to metabolize, no methane or hydrogen sulfide (the rotten egg smell) gases are produced. Second, rather than water, the feces is deposited into peat (also, no, uh, splash back). The peat then absorbs the water causing the bacteria to change to aerobic metabolism which precludes the generation of methane. 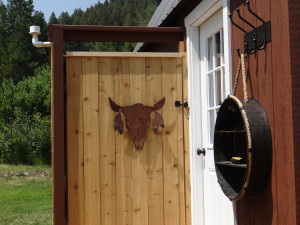 Just to be completely sure, however, I’ve installed a solar-powered vent pump that continuously draws fresh air into the peat tank and exhausts the old air out the vent (you can see the pump housing in the picture to the left).